HOW TO PLAY CASHWORD SCRATCHCARD

In mid July 2018, National Lottery released the Cashword Bonus scratchcard. Whilst the cashword scratchcard had been released may times previously, the bonus word game caused a bit of confusion about whether players had won or not.

Even today, months after it was released, we still receive messages asking for help on how to play the Cashword Bonus scratchcard and requests to check scratchcards for winners.

Anyway, today we are going to provide as much information as possible on how to play the new National Lottery Triple Cashword Scratchcard as one of 11 new scratchcards released in April 2019.

Over the years, there have been many different versions of the Cashword scratchcards.

The idea of the game is to reveal as many complete words as possible in the main game area using the 18 letters revealed at the top of the scratchcard.

Slight variations of the game have included bonus games, where you can reveal a symbol to win a bonus cash amount, or reveal a 5 letter word – as first seen on the Cashword Bonus Yellow scratchcard.

This new version of the Cashword scratchcard is another new variation on the game. For the triple cashword scratchcard, you can play (and win) the normal way, however, you can win even more by revealing one or more complete word containing a circled letter.

You can win any prize from £3, all the way up to £300,000. The full prize chart, with number of scratchcards in circulation with approximate odds and number of prize can be seen in the below table taken from the National Lottery website:

With 6 jackpots available to be won, this scratchcard has the biggest jackpot available of any current£3 scratchcard with £300,000 handed out to anybody that reveals 12 complete words!

How to Play: Step by Step

Okay, we’ll start from the beginning.

Remember, unlike previous version of this scratchcard, you don’t necessarily get all 5 vowels, so only scratch them off if you get them as part of your 18 letters.

Proceed to scratch off the letters in the main game play area.

Even if you don’t win, you are likely to reveal at least 2 complete words using the letters.

If you reveal 3 or more complete words, you are a guaranteed winner. The more you reveal, the more money you win.

However, here comes the kicker. If one of the complete words you have scratched off contains one of the 4 circled letters, then you triple your prize.

For example, if you scratch off 3 complete words, but one of them includes a circled letter, then congratulations, you have tripled your prize. For instance, instead of winning £3, you have now won £9.

The most words you can reveal including a circled letter is 9. As seen in the above table, 9 revealed words would normally win you £100, but if one of your words has a triple letter, then it is now a £300 win!

You do not win anything if you have not at least scratched off letters to reveal 3 complete words.

However, if you’re still unsure, please get in contact with us directly via hello@scratchcard-winners.co.uk, or fill in the below form.

We can’t check winners from the barcode or 4 digit code, only from a photo. You can cover the 4 digit code if you feel uncomfortable sharing it, even though it doesn’t matter! 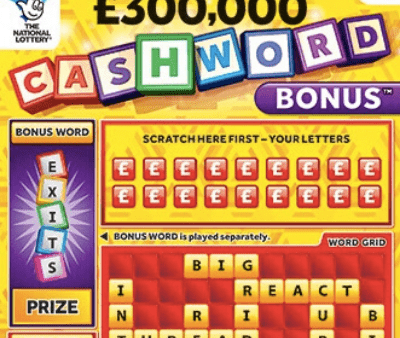 How To Play
How to play Cashword Bonus Scratchcard