It might be April Fool’s day, but these 4 new scratchcards are definitely real!

Of the 4 new National Lottery scratch cards, we’ve we have a new £1, £2, £3 and £5 scratchcard, which are similar to previous games we’ve seen before.

​Read below on how to play, paying particular attention to the new Cashword scratchcard!

The first National Lottery scratchcard to be released is the new £1 Blazin 7’s scratchcard.

How to play Blazin 7’s Scratchcard

You can win up to 7 times on this scratchcard.

Simply reveal a 🤞🏻 symbol to win the corresponding prize.

This new £1 scratchcard is a re-issue of one of the very old scratchcards – hence the ‘blast from the past’ reference. You can win a jackpot prize of £5,000!

Really easy to play this. Match 3 identical cash values to win, or alternatively, find a 🤞🏻symbol to instantly win a fiver!

This 3 Times Lucky Scratchcard is similar to other £1 scratchcard games the Royal 7’s scratchcard from March 2018!

How to play 3 Times Lucky Scratchcard

With 4 rows, match 3 identical symbols in a row to win the corresponding cash prize. You can win once, or multiple times on a scratchcard.

Reveal a X3 symbol to triple your prize!

We’ve seen similar scratchcards to the triple payout scratchcard before. This time, there are 5 jackpot prizes of £100,000.

There are 8 chances to win on this scratchcard.

How to play Triple Payout Scratchcard

This game is easy to play, on each of the 8 games on the scratchcard, reveal 2 identical symbols to win the corresponding prize.

You can win multiple times, with the chance to triple your winnings by revealing a X3 symbol in the triple spot.

How to play the £250,000 Multiplier Scratchcard

If you win, multiply your prize by the multiplier number!

It’s a standard £2 scratchcard game, similar to the Double Match scratchcard, with a chance of winning up to £50,000.

How to play the Love Island Scratchcard

In the main gameplay area, match one or more of your symbols to either of the two winning symbols to win the prize amounts!

Here’s another new cashword bonus, this time with a slight variation on the current came.

There is an additional way to win a prize on this scratchcard with the presence of the tripler circles in the game play area.

The standard cashword jackpot prize is £300,000, with 6 available to be won at the announcement of the game.

How to play the Triple Cashword Blue Scratchcard

First off, there is a bonus game; reveal a 🤞🏻 symbol to win £10. You can win on the main game and the bonus.

Then scratch off the 18 letters at the top of the scratchcard.

Proceed to scratch off the corresponding letters, match 3 or more words and you are guaranteed a prize.

If you reveal a complete word containing one of the letters in a circle, you win triple the total prize.

For example, ​6 complete words would win £20, but if one of the letter is within a circle and you still match 6 words, you triple your prize and win £60.

You can NOT win a triple prize and the bonus prize.

For more help or guidance, read the ‘How to play Triple Cashword Scratchcard’ article

How to play the Bingo White Doubler Scratchcard

There are 4 cards to play on this game, all which have the same rules, but different prize amounts.

Reveal one or more lines in one of the 4 cards using the 20 numbers from the caller’s card to win.

​If your line includes a 💰symbol, you win double the prize!

Here’s a new £5 scratchcard with the chance to win a £1 Million jackpot.

There are 3 jackpots to be won, but there are multiple chances to win on this scratchcard.

How to play the Cash Millions Scratchcard

GAME 1: Match your symbol to the winning symbol and win the prize.
GAME 2: Reveal a ’20’ symbol, and instantly win £20.
GAME 3: In one or more of the 4 rows, match 3 cash amounts to win. Reveal a multiplier between 2-5 to multiply your cash prize.
GAME 4: Add two numbers to 10 to win a prize in one more of the three rows.
GAME 5: Reveal one or more 🤞🏻symbols to win the cash prize.

This new £50 Million Cash Showdown scratchcard is similar to the current 20X Scratchcard, without the game on the reverse side of the scratchcard.

How to play the £50 Million Cash Showdown Scratchcard

Really easy to play this scratchcard.

Match one or more of your numbers with the winning numbers to win the corresponding prize amount.

How to play the Instant £500 Scratchcard

Similar to the last versions of this game, however with two bonus games to play also.

However, just like the £50 million Cash Showdown Scratchcard, find a 💰symbol to win that prize, find a ‘££’ symbol to win double the prize, or reveal a 💎 symbol to win all 15 plus 2 bonus cash prizes!

In the bonus games, find either a 🤞🏻 or gold bar symbol in the respective game to win the cash prize! 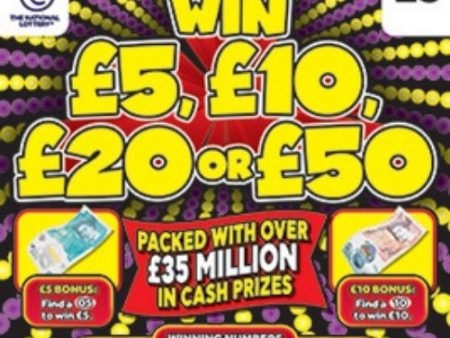 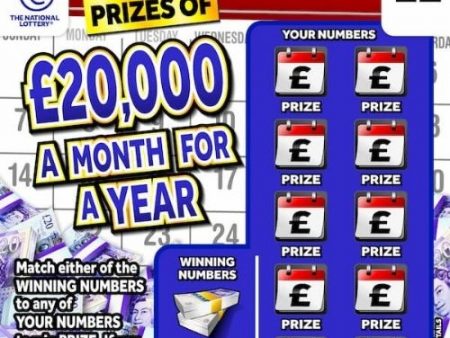 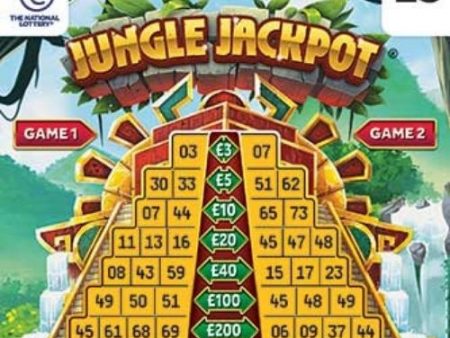