Experience the Slot and Scratchcard Hybrid

With so many scratchcards available today, it’s easy to think that they’ve been around for ages.

You’ve likely seen National Lottery scratchcards in your local shop, or seen players swiping their screen in a hurry as they play online scratchcard versions. But the fact is, they’ve only been around since the 1970s. But that’s just testament to how popular they are, with many online scratchcards released each year, as well as new slot and scratchcard hybrid games.

Before scratchcards were around, people had to make do with playing the lottery or other casino-style games. Now, that’s not a bad thing as they’re still fun, but there’s something about winning on a scratchcard, physical or digital, that you just can’t replicate.

In 1974, when Ph.D. graduate John Koza took the algorithms from Bingo and combined it with lottery, the first scratchcard was invented. Obviously, a lot more was entailed, with companies set up, testing, and such, but once the ‘instant game’ was released, it sold millions within the first week. Fast forward to where we are now, and a lot has happened. Scratchcards have become popular all over the world, with many big winners, but more importantly for us digitally savvy folk, we can now play them online.

The Beauty of Scratchcards

Scratchcards have a lot more to offer when you’re playing on your computer or mobile device. There are more choices; different spending options, a range of games and bigger prizes are up for grabs. You no longer have to walk into your local shop waving a winning ticket; you can get the wins right in the palm of your hand and straight into your online account.

You can still do it while performing the ever-popular scratching action, though this time, it’s done with your finger on the screen.

As far as online games go, scratchcards are also a safe bet. They don’t have large betting options, so you won’t worry about spending over your budget. All it means is you can play more, and for more! You can enjoy great graphics and fun gameplay with a huge variety available as you swipe away on an online scratchcard.

But there’s much more to it as over the years; scratchcards have been evolving. Some of them have their own little mini-games held within, acting more like an ‘instant win’ game than a scratchcard. And now we’ve seen them combined with slots to create a beautiful hybrid.

Whether you’re new to slots and want to try them out via a scratchcard, or you’re already a slots expert and want to see what it’s all about, the new hybrid versions are a joy to play. Simply head to a reputable place that hosts scratch games, and you’ll find what you’re looking for.

For instance, you could try out Microgaming’s own versions. As one of the titans of the online gaming industry, Microgaming knows a thing or two about creating online games. Rumoured to have created the first online slot (and hard to prove otherwise), they’ve been responsible for some of the biggest and best games around.

That goes for slot scratch games too. Take Avalon Scratch, for example. Avalon is one of Microgaming’s most popular slots, bringing the legend of King Arthur to life on the reels. Filled with mythical characters and bonus features, it’s fun to play. And now it can be played more simply on the scratchcard version.

Once you load it up, you’ll see the familiar Avalon symbols, such as the Crown, Knight and the King. But this time around, you press spin to match up the symbols that are revealed underneath. This is a great example of how the scratchcard slot hybrid games work as essentially, and you’re trying to do the same thing – match up the symbols.

Thankfully on the scratchcard, though, you don’t have to get them all in a row. Lost Vegas Survivors Scratch is another solid Microgaming game. It has all the same characters from the hit slot but in scratchcard fashion.

All you need to do is match three of the characters, which can be done by clicking or tapping (depending on the device you’re playing) a square to reveal a character. Each reveal adds more atmosphere and excitement, just like scratching off a real scratchcard, but with the added slot game vibe.

If you like slots and wish to see them in another format, just search for the hybrid scratchcard games. You’ll be able to see your favourite characters come to life in another way while giving you another way to play. And win, of course. 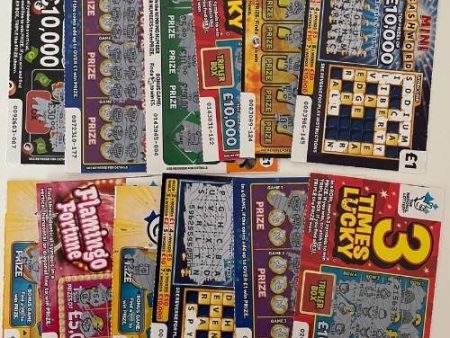